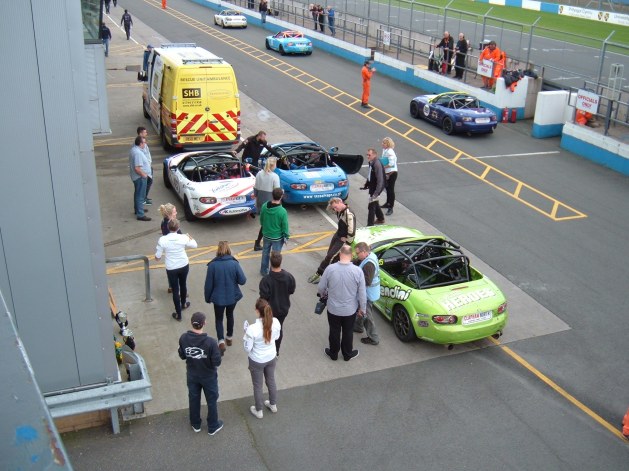 So for anyone who has read my first blog, six random facts about me, you’d have noticed that number three on that list as about my aims to get into racing somehow and that I’d been looking at the moment at the MX-5. You see when I mentioned about looking into racing to a friend of mine he suggested looking at MX-5. Followed by the announcement that he has two MX-5 cars, a mk1 and a mk2 that he would sell. He also suggested that I should look initially look at doing track days.
I quite like the idea of the mk2 as it would be fairly cheap and not need a lot of initial work but sadly on further research I found that the BR only races the mk1 and the mk3. It would also mean to make it ready for racing it would not be road legal meaning extra costs on the transport side. However the organizer of the MX-5 racing did send me a couple of tickets for the final races of the season at Donington Park so I could have a look around and talk to some of the drivers.
The event was over two days this weekend (14th and 15th October) and I had originally planned stopping over somewhere. Unfortunately most places were already booked up and I had to come back home anyway in the end.
But I did spend the Saturday at Donington Park which was my first visit to the site. Luckily the weather was really nice (very different to today as I write this I’m expecting it to tip down any minute). I’d missed the first qualifying race due to my Sat Nav still playing up. Never the less I got to see most of the other races. There was also some fiesta and Alfo Romeo races but I wasn’t really interested in watching them. This was after all a fact finding mission.
So during the breaks between MX-5 racings I had a look around the pits studying the race cars and getting some information from the drivers. The racers themselves seem like a nice community. If there was any rivalries I didn’t see it and I got the feeling that the whole thing was simply like-minded people enjoying the hobby that they were involved in.
I also realised there would be a lot of work and money involved in getting into this type of racing. Maybe not as much as some other types of racing but still costly. For example I was told that a set of tyres for the mk-3 is £450. Given that you’d probably get though a fair few tyres over a season this could mount up.
As for the car itself, well they are stripped down to the basics. In most cases its left with one seat and most of the electrics ripped out and replaced with racing parts. Then there is the roll cage on top. Maybe the thing that make me waver the most though was seeing some of the cars after a particular bad knock. One car to me seemed like a right off and I couldn’t help thinking that knowing my luck I’d write of the car within a couple of races.
So as much as I enjoyed the day and felt a bit at home it would seem my friend might be right about doing the track days. At least for now. It will give me a bit of practise going around the laps and as the car can be road worthy it would mean simply having to drive to the track. But I still will hold on to the dream of maybe being out there racing on the track one day. And I’m not even dreaming of winning. Just being part of the team and being out there would be enough for me. One day I will go back, yes one day.

This is a text widget, which allows you to add text or HTML to your sidebar. You can use them to display text, links, images, HTML, or a combination of these. Edit them in the Widget section of the Customizer.

This is a text widget, which allows you to add text or HTML to your sidebar. You can use them to display text, links, images, HTML, or a combination of these. Edit them in the Widget section of the Customizer.